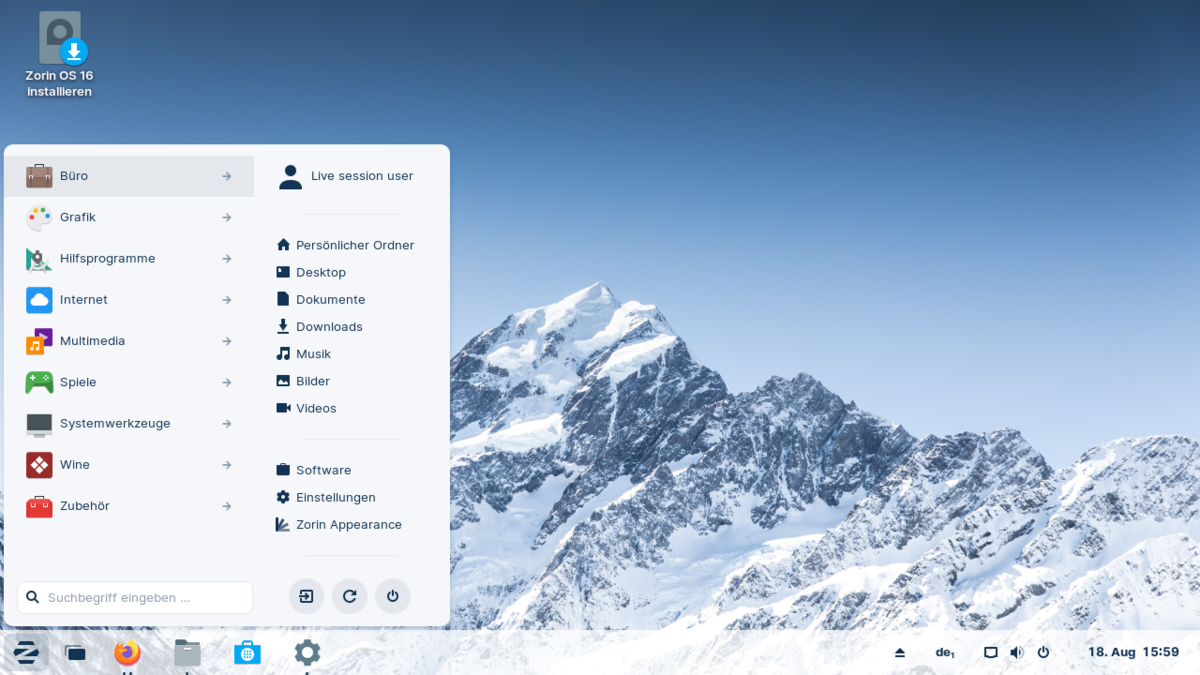 Zorin OS is the alternative to Windows and macOS designed to make your computer faster, more powerful, secure, and privacy-respecting.

already know how to use.​

Zorin OS is designed to be easy, so you don't need to learn anything to get started. The Zorin Appearance app lets you change the desktop layout to feel like the environment you're familiar with, whether it's Windows, macOS, or Linux.

Your computer should work as fast as you do. Zorin OS runs lightning quick and doesn't slow down over time. Apps open fast, so you can spend more time being productive.

We've streamlined the Zorin OS Lite edition to work on computers as old as 15 years. With it, you can keep using your PC for longer to save money on upgrades and help the environment.

We believe privacy is a fundamental human right. That's why Zorin OS doesn't collect personal data, so advertisers and governments can't spy on your activity. Zorin OS is Open Source, so anyone can audit its source code to verify its privacy.

A world of incredible Apps.​

Zorin OS comes with all the essential apps you need out of the box, so you can get working right away. Discover thousands of powerful apps from the built-in Software store. You can even run many Windows apps in Zorin OS with Windows App Support.

Play an enormous library of your favorite games, whether they're AAA titles or indie games. Install native Linux and Windows games from Steam, Lutris, and other sources. Zorin OS comes loaded with NVIDIA & AMD Radeon graphics drivers and game optimizations, so you can get the best performance easily.

Can I try Zorin OS before installing it on my computer?
Absolutely! You can run Zorin OS from a USB drive to test-drive it without touching your computer's hard drive. When you're ready to install it, simply double-click on the "Install Zorin OS" icon on the desktop and follow the step-by-step instructions on the screen.

How much does Zorin OS cost?
You can download and use the Core or Lite editions of Zorin OS completely free. For more advanced features, additional apps, and support, you can purchase Zorin OS Pro from here.

Will [insert app] work in Zorin OS?
You can install a huge library of apps from the built-in Software store, including many popular apps you know and love. Zorin OS is also natively compatible with Ubuntu & Linux apps (.deb or .AppImage executables), and you can run many Windows apps by simply double-clicking on their .exe or .msi file.

How long does it take to get Zorin OS?
The time it takes to download Zorin OS and create a USB install drive will depend on your Internet connection and hardware. Zorin OS usually takes between 10 and 20 minutes to install on your computer, just enough time to have a coffee. You can find out how to install Zorin OS here.

How long will Zorin OS get software updates for?
Zorin OS 16 will receive software updates and security patches until at least April 2025. We normally release major versions every 2 years, so you'll have plenty of time to upgrade to future versions to extend support.